Discussion of the league and of our favorite team.
Post Reply
56 posts

“Deandre is a force on both ends of the floor, who has elevated his game every year and will continue to do so,” said General Manager James Jones. “DA is so important to what we do and without him we could not have reached our recent levels of success. We are excited to keep Deandre at home in the Valley where he belongs.”

“I’m happy to put free agency behind me and ready to work and compete for a championship with my teammates,” said Ayton.

Since it gets cut off in the tweet, look at what it says on the bottom of the image 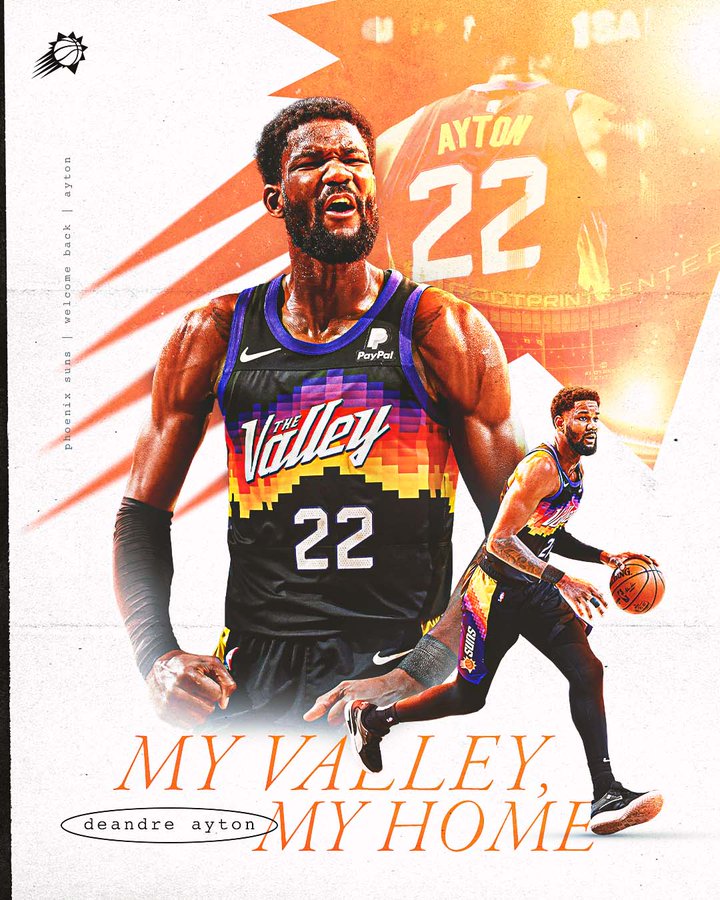 OK, at least Sarver and Jones were there.
"It should burn. It'll probably burn forever. But last season is done." - James Jones

Come on. You really got that out of it?
"It should burn. It'll probably burn forever. But last season is done." - James Jones

Come on. You really got that out of it?

You think he really wanted to be here?

He didn't get the fifth year he asked for.
Top

Come on. You really got that out of it?

You think he really wanted to be here?

He didn't get the fifth year he asked for.

He's got 133 million reasons to be happy.
"It should burn. It'll probably burn forever. But last season is done." - James Jones

Some quotes from the article:


Phoenix general manager James Jones said he told Ayton through the entire free agency process that he planned to re-sign him, including during a Zoom conference call on July 1. James also told ESPN's Andscape that it was "important" and "critical" to match immediately.

"We wanted Deandre here," Jones said in a phone interview. "He's vital to what we do, at the core of everything that we do. And throughout this whole process it was, it rang true. We wanted to keep him here, and the moment we can come to an agreement, we would. So, waiting 24 hours, 48 hours, that wasn't something we needed to do because going into it, we knew this is where he wanted to be and where we wanted him to be.

"I'm one to just be direct. And if you're convicted, if you know what you want to do, you do it. But if there's any doubt from anyone that we wanted him, I think that the matching did that. It was urgent for us. It was important. It was critical for us. So, we just wanted to make sure that we handled our business quickly."

"This is a blessing," Ayton told ESPN's Andscape in a phone conversation after signing his contract. "This contract not only has generational impact for my family, but also with the way we are able to work in the Phoenix community and home in the Bahamas. That is the things that we go by ...

"I've come to understand that this is a business. So, I was more anxious to know the end of the result so I could focus, move on, and just get back to work. I just treated everything like a business. Just keep being professional, approach everything with professionalism and not looking too deep into it."

"The shift in free agency brought a lot of uncertainty through the whole process," Ayton said. "I got to give a lot of respect to the Pacers organization. They were aggressive from the start and showing a lot of love. And we agreed to a max offer sheet. The Suns matched. Now, I'm back in Phoenix as a Sun.

"I'm happy. The process is over. I put all this behind me and focus on chasing a championship this upcoming season with my brothers."

Jones said he was elated for Ayton, his family and the Suns to have him back. Jones and Suns owner Robert Sarver were on hand when Ayton signed his contract from the franchise's practice facility in Scottsdale, Arizona.

"I just told him, I'm happy for him," Jones said. "I'm proud of him for how he handled it and how he approached it. I'm just excited for what his next steps look like. He's motivated to continue to improve, and we're motivated to help him reach that level.

Suns head coach Monty Williams added he was ecstatic Ayton was back as his starting center, and he knew all along "we were going to match any offer."

"James and myself, we talk a lot and he'll let me know what's going on with the contract and ask for my opinion," Williams said to ESPN's Andscape. "I try to stay out of persuading him when it comes to him making decisions. But we knew any offer that he got, we were going to match.

"... I'm happy for Deandre just because I know this is what he wanted. He wants to be in that class of players that's regarded in this way. So, from that standpoint, I think as a competitor, that's what you want. When you see a guy working for that, that part is pretty cool."

These are Ayton's first comments since that Game 7 he described as "in the past." He also said he and Williams are on good terms and described their relationship as "calm."

"Game 7 was an anomaly. We let that get away from us as a team. That is all in the past. We're going to look forward. We are going to move on," Ayton said without going into detail.

Also both Ayton and Williams said they have put game 7 behind them and that things are good between them.
"It should burn. It'll probably burn forever. But last season is done." - James Jones

And just this morning we had this multifacetedly idiotic article from Bleacher Report:


If this ranking seems a spot or two too low, understand it's pricing in the unknown future of Ayton. The $133 million offer sheet Phoenix matched can't be viewed as a clear sign it wants to go forward with Ayton at center. That's possible if fences can be mended, but the decision to match may have been more about retaining a valuable asset that would have otherwise gotten away for nothing. Ayton, the Suns or both could agree it's better for the big man to stay home until he can be traded on Jan. 15.

This is a ranking of starting fives, and Ayton is (or was) an important part of the Suns'. But their top four might still deserve this position if the fifth piece was a tackling dummy.*

*Which Paul would still find a way to yell at.

Well this is very reassuring. Props to everyone for working towards a resolution.
Top

By the way, those “second contract” comments that everyone always talks about from before he got drafted got taken completely out of context. First of all, he didn’t say that was his “goal” or his “only goal.” He was asked what “success” would look like. He was comparing it to people who think they’ve “made it” as soon as they get drafted, but he was saying that you have to put in the work and earn that second contract and at that point it would mean you’ve “made it” in the league and you have achieved “success” as a professional basketball player. People made the quote out to be way more controversial than it should have been, imo.
Top

I'm disappointed to not find the information I was hoping for in this thread.