Political discussion here. Any reasonable opinion is welcome, but due to the sensitive nature of the topic area, please be nice and respectful to others. No flaming or trolling, please. And please keep political commentary out of the other board areas and confine it to this area. Thanks!
Post Reply
227 posts

Manafort and his junior partner. My guess is the phone lines are open and they are given anyone in Manafort's circle to snitch it up.
Go Suns!

people in the obama admin should be going to jail over this
... if true.

^ Your media sources are garbage and unworthy of serious discussion. Seriously reconsider where you get your news.
Top

It’s the Trump playbook. Everytime he is accused of something he immediately accuses somebody else of the same thing. The right wing media has doubled down on it.
Top

Marty [Mori Chu] wrote:^ Your media sources are garbage and unworthy of serious discussion. Seriously reconsider where you get your news.

I don't understand the point of your post.
Top

LMAO, you are linking to a conspiracy theory web site. Come on, man.
Top

Why do you guys engage with SDC? I don't get it.
"It should burn. It'll probably burn forever. But last season is done." - James Jones

Marty [Mori Chu] wrote:LMAO, you are linking to a conspiracy theory web site. Come on, man.

this just out today. you should change the title of this thread back to the original. people from the obama administration are going to jail.

Superbone wrote:Why do you guys engage with SDC? I don't get it.

#FusionCollusion - Matt Gaetz(R) demands Intel Comm. release classified memo on the FBI and the Department of Justice subversion of democracy. -- "facts contained [...] are jaw-dropping and demand full transparency. There is no higher priority than the release [...] to preserve our democracy."

A Bombshell House Intelligence report exposing extensive FISA abuse could lead to the removal of senior government officials
"Sources say the report is “explosive,” stating they would not be surprised if it leads to the end of Robert Mueller’s Special Counsel investigation into President Trump and his associates." 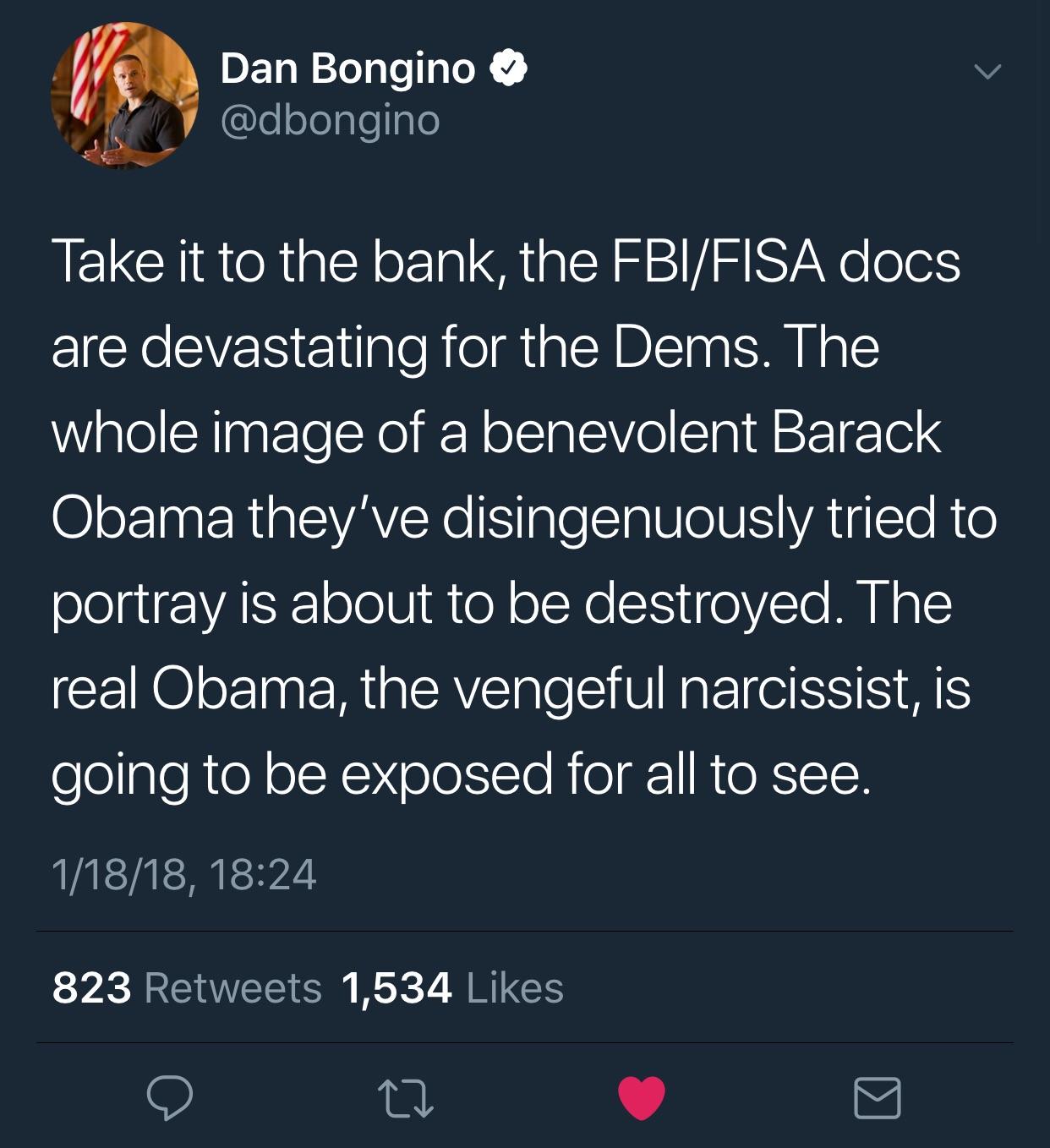 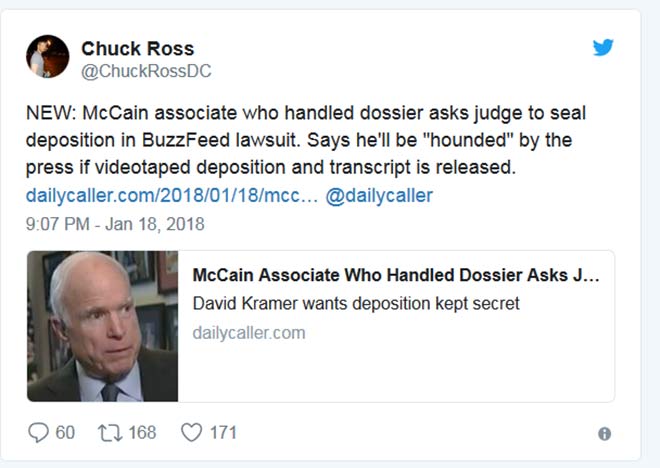 “It’s troubling. It is shocking,” Rep. Mark Meadows (R-NC) told Fox News. “Part of me wishes that I didn’t read it because I don’t want to believe that those kinds of things could be happening in this country that I call home and love so much.”

“The facts contained in this memo are jaw-dropping and demand full transparency. There is no higher priority than the release of this information to preserve our democracy,” said Rep. Matt Gaetz (R-FL), a member of the Judiciary Committee, which oversees the DOJ and the FBI.

Another Judiciary Committee member, Rep. Steve King (R-IA), called what he saw in the memo “sickening” and said it was “worse than Watergate.”

“The classified report compiled by House Intelligence is deeply troubling and raises serious questions about the upper echelon of the Obama DOJ and Comey FBI as it relates to the so-called collusion investigation,” he tweeted.

“You think about, ‘is this happening in America or is this the KGB?’ That’s how alarming it is,” Rep. Scott Perry (R-VA) told Fox News.

“It is so alarming the American people have to see this,” Rep. Jim Jordan (R-OH), a senior member of the Judiciary Committee, also said to network.

Gaetz: ‘I Believe There Are People Who Will Go to Jail’ Over Intel Memo
…’Entire Mueller Investigation Is a Lie Built on a Foundation of Corruption’…

Dear SDC,
When you've posted things from sources deemed unreliable in the past and have a unapologetic right leaning bent, everything you post from then on will be glossed over with only rolling eyes and immediately dismissed, no matter how valid or true they are. You must understand that you've undermined yourself already and your audience here has no interest in seeing your pov, when they've already made up their minds on you and the subjects you've posted about. Sorry, those are just the way things are. Kudos for never being deterred though, haha.
Sincerely,
In2
"When we all think alike, nobody is thinking" - Walter Lippmann
ブランドンに行こう
Top

I don't have him blocked, but I just scroll past his posts and do not read them. He has unfortunately fallen victim to an issue that affects more and more Americans of not understanding how to vet sources and media outlets, leading to hyper-partisan, conspiratorial, incorrect grasp of news and current events. This is not just a right-wing problem; there are lots of kooky sites with extreme stuff about Trump/Russia and other pro-left-wing stuff that is fabricated or exaggerated.

We need to do better. We need to be able to discern what media sources are credible and which ones have what kinds of biases.

Where do y'all get your news? Here are places I generally like to read:

Since the above are mostly center-left, I add in a few conservative sites just so I know what they're saying. Don't always agree with them but want to know the general tenor of their coverage:

I really want to avoid openly obviously blatantly biased sites, so I tend to avoid the following:

You can’t win that argument. They will all argue that your sites are fake too and that their sites are telling the truth, no matter how out in right field there they are.

I like to read news from multiple sources too. I didn’t see The Hill on your list. That’t 100% politics with a very active comment section split between both sides. Politico is similar but they make me comment as my Facebook real name and that I won’t do. The Hill allows me to make up an anonymous name and that is a must nowdays.

I still read CNN too. They used to try real hard to come across as unbiased but, after Trump declared war on them and their CEO they are definitely anti Trump. I don’t see them making up lies like Trump does, they just slant everything against Trump like FOX does against Democrats. I suppose that is bad but, since I dislike Trump so much I take it as part of the resistance and it makes me feel good for probably the same reason Republicans like to watch FOX News. They know it’s biased and they are ok with it because they are biased too and FOX tells them what they want to hear.

I suppose that’s the reason SDC reads only extreme right wing fringe sites. They tell him what he wants to hear.
Top
Post Reply
227 posts