Political discussion here. Any reasonable opinion is welcome, but due to the sensitive nature of the topic area, please be nice and respectful to others. No flaming or trolling, please. And please keep political commentary out of the other board areas and confine it to this area. Thanks!
Post Reply
9 posts • Page 1 of 1

Trump is going to have a big parade with fighter jets and tanks and fireworks. There is a VIP section with tickets being given out by the GOP/RNC.

Is this a good thing? Will you watch it? 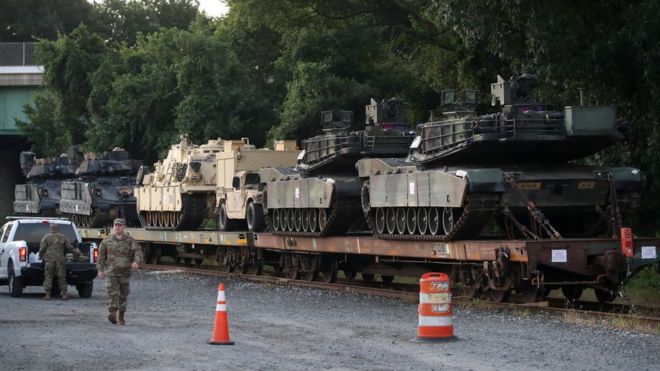 Not going to watch it. Not a fan. Seems silly and super unneeded. Couldn't care less.
"30 wins would be an extremely disappointing season" yeah, I said it and I mean it.
Top

My take is, I wouldn't generally mind some kind of Washington DC celebration on the 4th of July. But I strongly object to the idea of making the 4th into a partisan event. And you just know that this President will use the holiday as an opportunity to trash his enemies and glorify himself and his allies. So that bums me out. It's important to have things in our politics that are nonpartisan where we just come together and be one people. This won't be that.

I also don't like strutting around the military as a brag or a show of our strength. We don't need to do that. Our military is so ridiculously more powerful than any other country's that I don't think we need to show it off in that way. And I don't like the glorification of weapons of war and death. I strongly support our troops and the sacrifices they make, but this doesn't feel like the right way to thank them or celebrate them.
Top

Yeah, this kind of comes off as a taunt to those who might want to try to poke the bear. "Come at me bro!" Which is dumb, even if you are the biggest bully on the street.

I agree that it should be non-partisan in nature, to celebrate the country as a whole. I get the feeling that he doesn't think anything he does would appease a certain segment, so he kind of just thinks, "F it!" Or, he really appreciated the weird parades of the Soviets, Nazis, Communist China and N. Korea or any other despot out there. It probably depends on your natural lean, idk.

I mean, I can't remember in my life when we've ever had that type of parade before for the 4th. Maybe someone else can point to it being a tradition that was done in the past.
"30 wins would be an extremely disappointing season" yeah, I said it and I mean it.
Top

I’ve never seen it done before. Then again I haven’t seen a lot of things done before Trump. There is a small chance that Trump uses this as a way to bring all Americans together but, after seeing Trump operate for the past two years I am pretty sure he will just use this as a way to bash his enemies who all seem to be Americans. We don’t need to show off our military hardware like some countries do to show how powerful they are. We have been demonstrating our military’s capabilities for real for many decades on the battlefield. This is all Trumps ego on display once again.
Top

Seems like something Kim Jong Un would do. I'm as patriotic as the next guy but this is overkill.
Wormwood/Superbone 2019/2020 season bet: Suns win < 30 games, Wormwood wins, else 'Bone wins. 1 month avatar shame starting July 1st of winner's choosing.
Top

This is right out of the dictators playbook.
UOducks4life in a previous life. Valar Morghulis.
Top

I watched it. It wasn't as scary as I thought it would be, though I still object to it on principle. It was more boring than authoritarian and scary.

I think my main objection to it is that it is being used in campaign ads for President Trump's re-election. If the event was supposed to be non-partisan and about bringing us together for the 4th, why is he using it in partisan campaign ads? Yet another example of how this administration is chipping away at the precious areas of our country and government that are supposed to stay above the fray of political partisanship.
Top

I was working and didn’t watch it. Not that I would anyway. I read about it later and it sounded like he got some good advice and for the most part stayed away from politics and just read what somebody wrote on the teleprompter that was fairly normal patriotic stuff.


“The Continental Army… manned the air, it rammed the ramparts, it took over airports, it did everything it had to do,”

That was pretty funny. I am not sure which airports George Washington took over though.
Top
Post Reply
9 posts • Page 1 of 1